We're sorry but the candle you have selected is currenty in the process of being purchased or has just recently been purchased.

Please feel free to select another candle or check back in 15 minutes to see if the candle you have selected has been released for purchase.

We're sorry but there are no candles available for lighting.

You have already begun a candle purchase session. If you would like to continue with your current candle choice please click "Continue" otherwise please click "Select Another".

The lighting of a Memorial Candle not only provides a gesture of sympathy and support to the immediate family during their time of need but also provides the gift of extending the Book of Memories for future generations.

In the event that there is an error
in the information presented,
please contact the funeral
home by clicking here.

Obituary for James B. O'Connell, Jr. 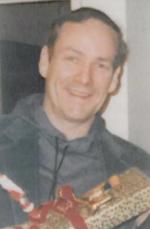 Plattsburgh
Mr. James B. “Jim” “By” O’Connell, Jr. of Pear St., Plattsburgh, NY passed away Monday September 14, 2015 at the UVHN CVPH Medical Center. He was born in Albany, NY on February 17, 1950 the son of J. Byron and Jacqueline O’Connell, Sr.
Jim attended the Campus School until 8th grade, then Northwood Prep School graduating Suma Cum Laude. He was a graduate of University of Southern California and the Glendale School of Law, Glendale, CA. Jim worked as a paralegal for his father J. Byron O’Connell. His hobbies were reading, watching the history channel, going to garage sales and spending time on his computer.
He was predeceased by his parents, his paternal grandparents F. Claude and Helen (O’Meara) O’Connell and his aunts Mary O’Connell-Frandino and Helen O’Connell.
By is survived by his stepmother Shirley O’Connell of Plattsburgh, his siblings; Cynthia O’Connell of Plattsburgh, Michael O’Connell of Fort Lauderdale, FL, Tracey O’Connell and her husband Ron Baker of Plattsburgh, Kathleen O’Connell of Madison, CT, Helen O’Connell Perry and her husband Rob of Beekmantown, Eric O’Connell of Plattsburgh and many nieces and nephews.
A private memorial service will be held at a later date and at the convenience of the family.
Arrangements have been entrusted to Brown Funeral Home, 29 Broad Street, Plattsburgh, NY 12901. Online condolences and memorial candles may be offered at www.brownfuneralhomeinc.com.


To send flowers to the family or plant a tree in memory of James B. O'Connell, Jr., please visit our Heartfelt Sympathies Store.

This Book of Memories brings those affected by loss together by encouraging communication and self-expression. By giving friends and family a special place to tell their stories and express their feelings of loss, it helps them care for one another during a very difficult time. Click on any of the links to the right to access features or information within this memorial website.

365 Days of Healing
Grieving doesn't always end with the funeral: subscribe to our daily grief support email, designed to help you a little bit every day, by filling out the form to the right.

52 Weeks of Support
It's hard to know what to say when your loved ones experience loss. Our weekly newsletter provides insights, quotes and messages on how to provide help during the first year.