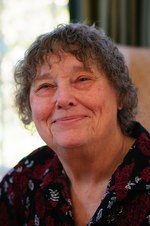 Barbara Grace Gregoire, 86, formerly of Burke Road in Beekmantown, passed away Thursday, January 23, 2020 at the Home of the Good Shepherd in Saratoga Springs.
She was born in Plattsburgh on August 22, 1933, the daughter of the late Adolphus “Joe” and Opal Anna (Gerke) Busch.
Barbara was employed as the first female telephone installer/repairperson in New York State and was the first grandmother in the United States to hold that position. She retired from N.Y. Telephone after many years of service. She was most proud of her children and their accomplishments. Her greatest hobby was her family. Barbara was a vocal fan at her children’s and grandchildren’s sporting events. She was a loving grandmother and great grandmother and competitive GO FISH player. She was a faithful communicant of St. Peter’s Church.
She is survived by 8 children and their spouses; Deborah and Steven Miller of Glenville, NY, Susan and Rich DeFichy of Niskayuna, NY, Anne Gregoire of Brooklyn, NY, Denise Gregoire of West Chazy, Rodney and Katherine Gregoire of Chelmsford, MA, Michael and Sheila Gregoire of Malta, NY, David Gregoire and fiancée Vicki Bone of Plattsburgh, Kevin and Laura Gregoire of Sullivan’s Island, SC, 17 grandchildren, 11 great grandchildren and many nieces and nephews.
She was predeceased by her brothers Thomas and Alvin Busch and her beloved grandson Adam Gregoire.
Calling hours will be held on Monday, January 27, 2020 from 4:00 pm to 7:00 pm at the Brown Funeral Home, 29 Broad St. in Plattsburgh. A Mass of Christian Burial will be celebrated on Tuesday, January 28, 2020 at 10:00 am at St. Peter’s Church. Interment will be in the parish cemetery at a later date. In lieu of flowers, donations may be offered to the North Country Mission of Hope.
Arrangements are entrusted to Brown Funeral Home, 29 Broad St., Plattsburgh, NY (518) 561-3980. Online condolences may be offered at www.brownfuneralhomeinc.com.