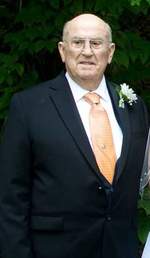 Clarence E. Duquette Sr., 93, of Cadyville, passed away on Saturday, February 29, 2020 with his family by his side. He was born in Cadyville on May 24, 1926, the son of William and Julia (Burnell) Duquette.
Clarence served his country in the United States Navy in WWII. Following his honorable discharge, he owned and operated CE and BF Duquette Oil in Cadyville, NY. He was a founding member of the Cadyville Volunteer Fire Department and attended meetings into his 90’s. He donated much of his time giving back to the community and was a founding member of the Cadyville Youth Commission. He was a true outdoorsman; camping, hunting, snowmobiling and most of all going fishing with his wife Ruth. He often could be found spending time in his garden growing vegetables, caring for his lawn or taking a Sunday drive. Clarence was competitive in nature, bowling or playing Pinochle with his family and friends.
He was predeceased by his parents, his wife Ruth, his daughter Cathy, his siblings; Amos, Millie, Kay, Peggy, Morris, Clifford, and Doris.
He is survived by his children; Diana Duquette, Debbie Varin and her husband Joey, Clarence “Butch” Duquette Jr. and his wife Andrea, grandchildren; Marcy Amell and her husband Jason, Alyssa King and her husband Mark, Brittany Varin, and Taylor Duquette, and one great-grandchild on the way, his sister, Theresa Andre and her husband Jim and his brother Burton Duquette and his wife Marjorie, and many nieces and nephews.
Calling hours will be held Wednesday, March 4, 2020 from 4:00-7:00pm at the Brown Funeral Home, Plattsburgh. A Mass of Christian Burial will be celebrated on Thursday, March 5, 2020 at 11:00am at St. James Church. Burial will be at a later date in the parish cemetery with full military honors.
In lieu of flowers, memorial donations may be offered to the Cadyville Fire Department, North Country Honor Flight, Hospice of the North Country or a Memorial Mass at St. James Church in Clarence’s name.
Arrangements are entrusted to Brown Funeral Home, 29 Broad St. Plattsburgh, NY (518) 561-3980. Online condolences may be offered at www.brownfuneralhomeinc.com.