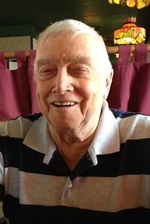 Clifford John Lavigne, 89, of Maple St. Morrisonville passed away Sunday February 9, 2020 at Meadowbrook. He was born in Morrisonville on August 18, 1930 the son of Clifford Steven and Rosanna (Lawless) Lavigne. John was a Korean Service Veteran serving in the U. S. Army. He worked at Dorn’s Transportation as a mechanic and retired as a mechanic at the Town of Plattsburgh. John enjoyed drinking coffee, camping, carpentry, woodworking, maintaining the swimming pool and helping people in the community. He was an ever present grandfather, but most importantly he loved spending time with the love of his life Mary Lou. He was a member of the Knights of Columbus Council #6067, St. Alexander’s Church and a former member of the Morrisonville Volunteer Fire Department.
John was predeceased by his parents, his brothers; Charles and Kenneth.
He is survived by his loving wife of sixty three years, Mary Lou Lavigne, a brother-in-law Arnold Smith, his son Michael (Amy) Lavigne, his daughter, Rose Marie (Michael) Taylor, three granddaughters; Kristen (Kerry) Chapin-Lavigne, Jillian Taylor, Michelle Lavigne and her fiancé Kevin Keane, two step granddaughters; Allison Trombley, Erin Trombley and several nieces and nephews.
Calling hours will be Thursday, February 13, 2020 from 4:00 p.m. to 7:00 p.m. at the Brown Funeral Home, Plattsburgh.
A Mass of Christian Burial will be celebrated on Friday, February 14, 2020 at 11:00 a. m. at St. Alexander’s Church.
Interment will be at a later date at St. Alexander’s Cemetery.
In lieu of flowers, Mass intentions may be offered in John’s memory.
Members of the Knights of Columbus Council #6067 are asked to meet Thursday at 6:45 p.m. at the Brown Funeral Home.
Arrangements have been entrusted to the Brown Funeral Home, 29 Broad Street, Plattsburgh, NY 12901. Online condolences and memorial candles may be offered at www.brownfuneralhomeinc.com.