Obituary for Deborah A. Dahlen 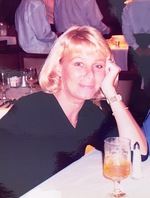 Plattsburgh
Deborah A. Dahlen, 71, of Plattsburgh, passed away on Tuesday, February 4, 2020 at Meadowbrook Healthcare Facility. She was born in Hartford, Connecticut on November 27, 1948, the daughter of Dominic and Betty (Morse) Ferraro.
Debbie graduated from Rutland High School in Rutland, Vermont and earned a nursing degree at Castleton University. After graduating from nursing school, she worked as a registered nurse at a nursing home in Rutland, and then at the Massachusetts Eye and Ear Infirmary in Boston. She then lived in Morgantown, West Virginia, where she developed her lifelong passion for WVU Mountaineers basketball.
She was a fitness enthusiast for many years. She taught aerobics at the Bay Club, wrote a health and fitness column for the Press Republican, and proudly founded the Senior Fitness Program at Eye Care for the Adirondacks which remains operational today. She was committed to helping seniors remain social, active, and positive. She would do anything to put a smile on their faces.
Debbie is survived by her son Robert and his wife Jennifer of Burlington, her daughter Julie of Plattsburgh, and her daughter Kate and her husband Tim of Boston. She had four grandchildren, three siblings and many nieces and nephews. She was predeceased by her loving father, Dominic.
A private family service has been held and interment will follow in the spring at Evergreen Cemetery in Rutland. Memorial donations in her name may be offered to Catholic Charities of New York.
The family would like to especially thank Debbie’s sister and brother in law, Sue and Roger Angles, and Debbie’s best friend and neighbor, Cherie Barber, for their compassionate care and companionship.
Arrangements are entrusted to the Brown Funeral Home, 29 Broad Street, Plattsburgh, NY 12901. Online condolences may be offered at www.brownfuneralhomeinc.com.