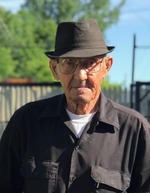 Douglas R. Rushford Sr., 86, of Plattsburgh, passed away Tuesday, December 15, 2020 at his home with his loving family by his side. He was born in Chazy on October 12, 1934, the son of Ernest and Kathleen (Stone) Rushford.
He owned and operated Rushford Trucking in Plattsburgh. He married Shirley Reeves October 29, 1952 on his wife’s birthday. He enjoyed being with his family, especially his grandsons Eddie and Joey and working aside his other family members and son-in-law Todd Lapham. He was always known for his hard-work ethic, continuing driving truck until his passing. In his free time he continued tinkering in his garage or going for Sunday drives.
He is survived by his children; Mary Pelkey and her husband Billy, Lisa Lapham and her husband Todd, Kelly Rostak and her husband Eddie, his grandchildren, his brother Gerald Rushford and sister, Clarissa Stone.
He is predeceased by his parents, his wife, his sons James and Douglas Jr.
There will be no calling hours. Services will be held at the convenience of the family.
Arrangements are entrusted to Brown Funeral Home, 29 Broad Street, Plattsburgh, NY. (518) 561-3980.