To share your memory on the wall of Edna Trudeau, sign in using one of the following options:


She is survived by her children;, Donna Hebert and her husband, Gilles of Plattsburgh, Sid Trudeau of Chazy Lake, Pamela Boulerice and her husband, Richard "Dick" of Mooers, Maude Trudeau and her Life Partner Jerzy Pawlowski of Altona, Monica Trudeau and her Life Partner Scott Pawlowski of Altona; her siblings; Oliver Hayes of Florida, Betty Hayes od Duanesburg, step son Carl Mousseau and wife Patricia, Linda Baxter and husband Kenneth, and Richard Doe. She is also survived by her grandchildren, her great grandchildren, her great great grandchildren and many nieces and nephews.

Online condolences may be made at www.brownfuneralhomeinc.com.
Read Less

To send flowers to the family or plant a tree in memory of Edna M. Trudeau, please visit our Heartfelt Sympathies Store.

Receive notifications about information and event scheduling for Edna

We encourage you to share your most beloved memories of Edna here, so that the family and other loved ones can always see it. You can upload cherished photographs, or share your favorite stories, and can even comment on those shared by others.

Danielle & Mike Qualls, Dwayne and Melanie Smart, and other have sent flowers to the family of Edna M. Trudeau.
Show you care by sending flowers

Posted Feb 28, 2020 at 01:54pm
Donna,Syd,Pam,Maude,Monica and family of Edna. I am so sorry for you all, I would have liked to have gone to the wake but I am having a bout with the stomach bug, so you are all in my thoughts and prayers. May your sorrows be short-lived. You had her a long time. Delores
Comment Share
Share via:
SS

Posted Feb 27, 2020 at 10:40am
On behalf of the Seton Catholic family of faith, I would like to extend our deepest sympathy to Edna's family and friends. May she rest in peace and may the angels lead her into paradise.
Comment Share
Share via:
DQ

Posted Feb 26, 2020 at 03:21pm
Wishing you peace to bring comfort, courage to face the days ahead and loving memories to forever hold in your hearts.

Posted Feb 26, 2020 at 11:20am
In 1991 after being a member of other parishes in the city I registered in at St. Peter's Parish a church I had attended regularly while a student at the girls academy across the street. As part of my re-entry onto the roles of this church I also joined the Altar Rosary Society which, at that time, met monthly for 10-months out of the year. It was thru this organization that I met Donna Trudeau-Hebert, her aunt, Yvette Trudeau (deceased) and, of course, the vibrant and active lady known as Edna Trudeau. Edna was always one of the first at meetings and a strong proponent of the recitation of the rosary which, I might add, she could say in English or French! The three women( Donna,Yvette, & Edna) formed a team that represented their family by creating the "House of Fortune" a big money raiser for our organization, and by being some of the best bakers especially " Carrot cake" which almost none of our celebratory gatherings could do without. To Donna and Gilles I say be proud of the many unobtrusive ways you supported Edna in her final years while lending her the dignity she so rightly deserved. May God bless you and your beautiful family as you say farewell to Edna. I am sure she will continue her legacy of praying for us in the company of many who have gone before.
Blessing Always, Margaret F. St. Clair-Coryer a.k.a.Peg
Comment Share
Share via:
DL 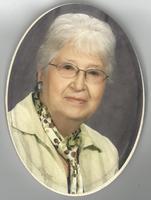