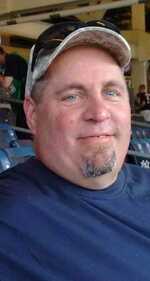 Edward Lyman “Eddie” Pepper II, 56, of Cumberland Head passed away Tuesday, March 23, 2021 at the CVPH Medical Center with his loving family by his side. He was born in Plattsburgh on April 22, 1964 the son of Edward L. “Bud” and Beverly (Provost) Pepper.
Eddie graduated from MAI in 1982 and worked for the NYS Department of Corrections from January 1990 to January 2020. He was a Big sports fan and loved to watch football, baseball, golf (pros, college and high school). He was an avid fan of the Dallas Cowboys, Duke Basketball, and New York Yankees. He loved March Madness and the Masters Golf Tournament. He coached youth baseball and basketball and umpired baseball and reffed basketball in his younger years. He was one of Mickey’s biggest sports fans and was so proud of his son. He loved hunting, fishing, camping, bowling, golfing, spending much of his time with his doggie Diesel and loved having bonfires in the Spring and Fall.
He is survived by his wife; Su-Ellen O’Connell Pepper, his son Mickey Edward Pepper, his parents Edward and Beverly Pepper, his sister; Amy Pepper Holzer, his mother in law; Mary Anne O’Connell, sisters in law; Lynn O’Connell and husband Mike Wales, Laurie and Chris Eamer, brother in law Ryon and Nicole O’Connell, many loved nieces and nephews his favorite aunt Lucille Flynn, his uncles Leslie and Donald “Stub” Pepper, and many cousins and their families.
He was predeceased by his father in law Chauncey “Nubby” O’Connell and grandparents Lawrence and Geraldine Provost and Adelbert and Ruth Pepper.
Calling hours will be held on Friday, March 26, 2021 from 4:00 to 7:00 pm at the Brown Funeral Home, 29 Broad St. in Plattsburgh. Face masks are required. A Mass of Christian Burial will be celebrated on Saturday, March 27, 2021 at 10:00 am at St. Peter’s Church.
Arrangements are entrusted to Brown Funeral Home, 29 Broad St. in Plattsburgh.
Online condolences may be offered at www.brownfuneralhomeinc.com