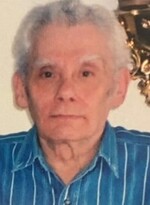 Edward W. Varno, 87, of Sara Lynn Road in West Chazy, passed away Sunday, April 4, 2021 at his home with family by his side. He was born in Plattsburgh on June 20, 1933, the son of the late Henry and Juliette (Bisallon) Varno.
Edward served in the Army during the Korean War and later was employed at Georgia Pacific for over 40 years and retired in 1996. He was a faithful communicant of St. Joseph’s Church for over 60 years and and served as an usher for many years. He was political minded and loved to argue politics and enjoyed bird watching.
He s survived by his wife of over 60 years, Barbara (LaPlante) Varno, his daughters and their spouses; Darlene and Robert Blake of North Carolina, Arlene and Glen Rasco of Cadyville, Donna and Jeff Baker of Beekmantown, Pamela and Emmet Drazic of Kent, Washington, Angela Gregoire and fiancée Jack Helfgott of West Chazy, his grandchildren; Carissa Hemingway, Anthony Baker, Tyler Baker, Andrew Baker, Elizabeth Santa, Christopher Blake, Samantha Blake, Jessica Soulia, Laura Moore, Amanda Davies, Steven Carroll II, Brandon Drazic, Zachary Drazic, Alex Lybecker. Nathan Stoddard, Brian Stoddard, Jacob Gregoire, 20 great grandchildren; a brother in law ; Larry LaPlante of New Jersey, and many nieces and nephews.
He was predeceased by his parents, his brother Donald and Robert “Bobby: Varno and a sister Frances Walsh.
A Mass of Christian Burial will be celebrated on Thursday, April 8, 2021 at 11:00 am at St. Joseph’s Church in West Chazy. Interment will be in the parish cemetery on Monday, May 3, 2021 following a 9:00 am Mass at St. Joseph’s Church. Masses may be offered in his memory and memorial donations may be offered to Hospice of the North Country..
Arrangements are entrusted to the Brown Funeral Home, 29 Broad St., Plattsburgh, NY