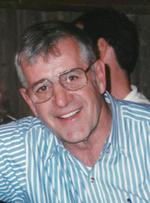 Glen G. Gonyo, 81, of Plattsburgh, formerly of Chazy, passed away Friday, January 17, 2020 at the UVM-CVPH Medical Center with his loving family by his side. He was born in Sciota, NY on March, 17, 1938 the son of Peter and Sadie (LaFleur) Gonyo.
Glen served his country in the United States Army. Following his honorable discharge, he was later recalled to serve during the Cuban Missile Crisis. Glen became a Truck Driver and retired from Winterbottom Trucking. He was a member of the American Legion West Plattsburgh. He enjoyed social gatherings with his friends and family; grilling and cooking under the cabana with a cold refreshment.
He is survived by his wife Diana Gonyo, his sons; Joseph Casey, David Casey and his wife Elizabeth, his grandchildren; Sarah, Zack, Conor, and Jacob Casey, his sister; Barbara Rivers and her husband Gary, and several nieces and nephews.
He is predeceased by his parents.
Calling hours will be held on Sunday, January 19, 2020 from 1:00pm-3:00pm at the Brown Funeral Home in Plattsburgh. A funeral service will follow in the Brown Funeral Home Chapel. Entombment will be Tuesday, January 21, 2020 at 2:00pm at the Whispering Maples Mausoleum in Plattsburgh.
Arrangements are entrusted to Brown Funeral Home, 29 Broad St., Plattsburgh, NY 12901, (518) 561-3980. Online may be offered at www.brownfuneralhomeinc.com.