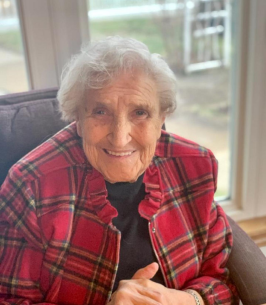 Helen K. Brault, 88, of Robinson Terrace, Plattsburgh, NY passed away on Friday November 18, 2022 at UVHN:CVPH Medical Center in Plattsburgh. She was born in Plattsburgh, NY on December 31, 1933 the daughter of Edward and Leah (Defayette) King
Helen graduated from D'Youville Academy in 1951. She married Andrew Brault, Jr. at St. Peter's Church on March 1, 1953. She worked for the telephone company for 4 years before joining her husband and father-in-law's construction company, Andrew Brault and Sons Construction as the bookkeeper. Helen enjoyed spending time with her family. She was predeceased by her parents, her husband Andrew Brault, Jr., a daughter Andrea Trombly, two sons; Anthony and Arthur Brault, a grandson Matthew Brault, three sisters; Theresa, Barbara and Joanne, and a brother Earl.
Helen is survived a son; David Brault and his wife Deborah of Essex, VT, a daughter-in-law Donna Brault of Plattsburgh, seven grandchildren; Lynn Trombly, Glenn Trombly and his wife Deana, Nichole Kivlehan and her husband Kieran, Christopher Brault, Andrew “A. J.” Brault and his wife Elizabeth, Cherie Brault and Jenna Calandros and her husband Jordan, 8 great grandchildren, a sister Clara McDaniel and Steve, a brother Clarence King and his wife Joan, a sister-in-law; Judy Akey and her husband Robert of Peru, several nieces and nephews also survive her.
Calling hours will be held on Tuesday November 29, 2022 from 3:00 to 5:00 pm at the Brown Funeral Home in Plattsburgh.
A Mass of Christian Burial will be celebrated on Wednesday November 30, 2022 at 10:00 am at St. Peter’s Church in Plattsburgh. Burial will follow in St. Peter’s Cemetery in Plattsburgh.
In lieu of flowers donations in Helen's memory may be made to Hospice of the North Country.
Arrangements are entrusted to Brown Funeral Home, 29 Broad Street, Plattsburgh, NY 12901 (518)-561-3980
Online condolences and memorial candles may be offered at www.brownfuneralhomeinc.com