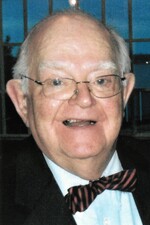 James E. Keable, 94 , passed away on December 20, 2020 in Plattsburgh in the presence of his loving wife of 68 years, Carolyn Keable. Jim was born in Brockport, NY on April 26, 1926, to Raymond and Loretta (Frank) Keable.
After serving in the Army Air Force in World War II, he moved to Plattsburgh to attend Champlain College. It was there that he met Carolyn Webb, whom he married on June 22, 1952. He graduated from Albany Law School in 1956 and returned to Clinton County to practice law and raise a family with Carolyn. He represented Clinton Community College for over 43 years. Jim loved his legal work and clients. He often accepted payment for his legal services in fresh produce from clients who could not afford to pay or he simply would not bill them. He retired as the Dean of the Clinton County bar five years ago. Jim was a member of the Masonic Lodge, the Shriners, and was a 4th degree member of the Knights of Columbus.
Jim was an avid golfer. He truly came to love the game after Carolyn learned to play, and he enjoyed golfing with his foursome which were called the “Old Farts”. He was a devout Catholic and attended St. Peter’s Catholic Church in Plattsburgh. His sense of humor and wit will be fondly remembered by those who knew him-as there is not a person Jim met that he could not make smile. Jim often said that family was the most important thing in life. As his grandchildren can all attest to, he made everyone he was around feel loved and cherished.
In addition to Carolyn, he is survived by his children and their spouses. Mark (Anne), Jeff, James (Linda), Mary (Robert Durocher), Scott (Pam), Greg, Ed (Scot Rogerson) and John (Dana). He is also survived by eleven grandchildren and nine great grandchildren.
He was predeceased by his parents, one brother and three sisters.
A Mass of Christian Burial will be celebrated on Wednesday, December 23, 2020 at 10:00 am at St. Peter’s Church. Face masks are required. The Mass will be livestreamed through the Brown Funeral Home Facebook page. Interment will be in the parish cemetery at a later date. In lieu of flowers, donations can be made to Hospice of the North Country or the Interfaith Food Shelf in Plattsburgh.
Arrangements are entrusted to Brown Funeral Home, 29 Broad Street, Plattsburgh, NY. (518) 561-3980. Online condolences may be offered at www.brownfuneralhomeinc.com