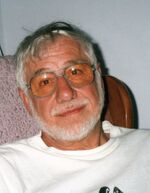 James Racette, 88, of Saranac, New York died on March 22, 2021 at Champlain Valley Senior Community in Willsboro after living a worthy and useful life. His large family and many friends will miss this special man. Jim was held in high regard by his family and most who knew him. A measure of the esteem of his family is that three of his grandsons are named for him. He was the salt of the earth, who over his lifetime achieved greatness in the eyes of his family and friends.

Jim was born at home on May 30, 1932 in Saranac, New York, the eldest son of Samuel and Matilda (LaValley) Racette. He was raised on his father’s farm on Pup Hill, and graduated from Sallaz Academy in Redford in 1948 and Canton Agricultural and Technical College in 1950. Drafted into the U.S. Army in 1952, he served for two years. While serving, Jim met Grace Seward of Brooklyn, New York. Jim and Grace were married on September 24, 1955 in Brooklyn before returning to the North Country to raise a family and live their lives. In 1961, Jim and Grace purchased the Pup Hill farm from Sam and moved their growing family into the homestead built by Jim’s ancestors.

In the early years of his marriage, Jim worked many jobs, including construction and selling fertilizer and farm insurance. He helped build the Adirondack Northway and the Cold War-era Atlas Missile silos in Clinton and Franklin County. In 1964, he became a correction officer. Jim rose through the ranks and retired from the Department of Corrections in 1994, completing his career as Superintendent at Adirondack Correctional Facility in Ray Brook. For many years he drove a school bus for Saranac Central School to supplement the family income.

Jim was an inquisitive person who valued learning, surrounded himself with books, and had a dry sense of humor. He recited Robert Frost poems from memory and appreciated a good pun (especially his own). While working in corrections and driving school bus, he attended SUNY Plattsburgh and received his Bachelor’s Degree in 1970. In the 1980s, he earned a Masters Degree in Public Administration from Sage Colleges. After retirement, he completed the Master Forest Owner program through Cornell Cooperative Extension.

Jim had a deep connection to the Pup Hill farm. For many years he kept cows, chickens, and pigs to provide meat, eggs and milk for his family. In the 1960s he planted acres of spruce and pine in the old farm fields and in retirement thousands of oak, maple, and black walnut trees around the property; the oak in particular thrived. For 15 years he and Grace lived in Ray Brook, but he returned to the farm often to relax by working his land.

Jim was a physically active man. He hiked, paddled, bicycled, and enjoyed cross-country and downhill skiing. Jim had a season pass at Whiteface Mountain into his early 80s. He competed as a cyclist at several Correction Department Olympics, medaling in his age group. After retirement he was a member of the Algonquin Chapter of the Adirondack Mountain Club.

Jim enjoyed travel. He visited his son Joe and his wife Dorothee in Kenya and Tanzania when they lived in Africa in the 1990s. For years he traveled every summer to Alaska’s Kenai Peninsula to help with the commercial salmon fishing business his daughter Geri and her husband Jeff built—Jim drove the totes of salmon to the fish buying station. He often brought along a grandchild on these Alaska trips. He drove the Al-Can highway in both directions several times. Jim also drove around the United States visiting national parks and out-of-the way places.

Jim is survived by his children: Steven (Cherie) of Saranac Lake; Peter (Karen) of Redford; Christopher of Atlanta, GA; Geralynn Ransom of Kasilof, AK; Joseph (Dorothee) of Delmar, NY; and Gregory (Lisa) of Wakefield, MA. He has ten grandchildren: Erin (Andy) of Saranac Lake; Douglas (Kate) of Swampscott, MA; James (Sarah) of Buffalo; Samuel (Caressa) of Chicago, IL; Katie of Missoula, MT; Benjamin of Anchorage, AK; Louis of Kigali, Rwanda; Madeline of Anchorage, AK; Hannah of Aspen, CO; and Clara (Olive) of Durham, NC. Jim is also survived by his sister, Ida Strack, and many cousins, nieces and nephews. He was predeceased by his wife Grace in 2019; his daughter Alexine in 2006; his son-in-law, Jeffrey Ransom in 1994; and his siblings Marie LaPlante, Elizabeth Kissner, Dorothy Tuthill and Alfred Racette.

The family is grateful for the care, kindness and love provided to Jim by the staff at Champlain Valley Senior Community since 2015.

A funeral service will be held at a later date. Memorial donations may be made to High Peaks Hospice at https://highpeakshospice.org/.
Arrangements entrusted to Brown Funeral Home, Cadyville NY. Online condolences may be offered at www.brownfuneralhomeinc.com