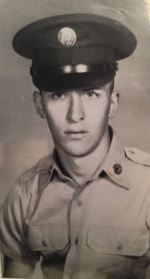 John F. Bourgeois, 70, of West Chazy, passed away away peacefully Wednesday, February 12, 2020 at UVM-CVPH Medical Center with his loving family by his side. He was born in Middlebury, VT on December 19, 1949, the son of Joseph and Janet (LaPierre) Bourgeois.
John treasured all of the moments he had with his family, whether it be traveling, hunting, or watching his grandchildren play sports. After graduating from Chazy Central Rural School in 1967 John entered the U.S. Army, proudly serving his country in Vietnam from February 1968-September 1969 with an honorable discharge. John was awarded six medals, among those two purple hearts and a bronze star. John retired from the Clinton County Sheriff's Department in June 2010.
John was predeceased by his father, Joseph Remi Bourgeois. His life will forever be cherished in the lives of his family. John is survived by his loving wife, Barbara (Nephew) Bourgeois, their children; Kimberly Villemaire and her husband Blair and John Bourgeois and his wife Aimee, their grandchildren; Kallie and Kirsten Villemaire and John Bourgeois, his mother; Janet LaPierre, and his siblings; Edward Bourgeois and his wife Linda, Robert Bourgeois and his wife Melody, Janice Bourgeois, Gary Bourgeois, and Linda Misiaszek and her husband Alex.
Calling hours will be Sunday, February 16, 2020 from 1:00-3:00pm at Brown Funeral Home, Plattsburgh, NY. A funeral service will follow for family and friends in the Brown Funeral Home Chapel. Interment with military honors will be at a later date in St. Louis of France Cemetery, in Sciota, NY. In lieu of flowers, donations in his memory may be made to the FitzPatrick Cancer Center or the Wounded Warrior Project. Arrangements have been entrusted to Brown Funeral Home, 29 Broad Street, Plattsburgh, NY 12901, (518)561-3890. Online condolences may be offered at www.brownfuneralhomeinc.com.