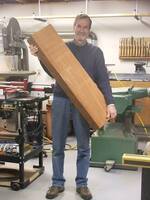 Jon Roy Lustenader, 66, of Beartown, passed away Sunday, March 21st 2021, at home with his family by his side while under the care of Hospice of the North Country after a brief, but intense, battle with cancer. He was born at Columbia Memorial Hospital in Hudson, NY on May 1, 1954 to Roy M. And Winnifred (Jaborg) Lustenader. Jon graduated from Columbia High School, class of 1972, and moved to the Plattsburgh area in 1975 where he would remain.

A jack of all trades and master of several, Jon would professionally serve as a mechanic, salesman, carpenter, contractor, and home inspector over his life. Upon moving to Plattsburgh to work at Northway Beverage, several of his regular customers became lifelong friends, and one became his father-in-law after introducing Jon to his daughter Susan (Nunn). With his wife, married in 1979, they ran an office supply business called The Inkwell through much of the 80’s. When the Inkwell ran dry, Jon began a full time career in construction that would, in different ways, be where he stayed for the rest of his life. In 1995 he landed as a home inspector, and was the proud owner of Adirondack Home Inspections, a job thoroughly enjoyed before he was forced to retire due to his sudden cancer diagnosis. He was the longest practicing licensed inspector in the area having just entered his 25th year.

Jon spent 17 of the last 20 years of his life caring for his wife who had become bedridden from Multiple Sclerosis. Putting the needs of his wife above his own, Jon’s sacrifices allowed Sue to continue to live in their own home. Upon Sue’s death in March of 2018, Jon began planning a seasonal/snowbird move to St. Mary’s, Georgia, where the majority of his family has migrated to. He was extremely excited about these plans and was thoroughly enjoying designing a house and yard. These plans came to a screeching halt when he was diagnosed with lung cancer and brain metastases in December 2020.

They say you can measure a man by the company he keeps. An even greater measure is the company that actively seeks him out during his final days to make sure that he and his family have everything they could possibly need to try and make it through his diagnosis and treatment. His wife’s core group of friends, the Girls of ’74 (especially Marilyn Dwyer and Christine Thume), took Jon under their wings and helped provide indispensable care to Jon during his last months and weeks at home. While Jon did not win his fight with cancer, he won the important parts of life in a landslide. A beautiful home that he designed and built, a loving family, friends who would do absolutely ANYTHING for him, and the admiration and respect of countless others.

In lieu of flowers memorial donations may be offered to Hospice of the North Country.
Online condolences and memorial candles may be offered at www.brownfuneralhomeinc.com.
There will be no calling hours, a celebration of his life will be planned when safe to do so.