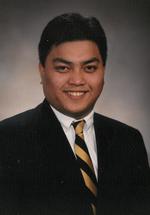 Joseph F. Manalang, age 48, of Cook Street, passed away, Wednesday, July first, 2020, at Champlain Valley Physicians Hospital in Plattsburgh, NY, after a long battle with diabetes. Joe passed away peacefully with his wife and Mother by his side. Joe was born in Quezon City, Philippines, July 15, 1971, the son of Jose Manalang and Isabelita (Francisco) Manalang.
He is survived by his wife, Britteny Morse-Manalang of Dannemora; one son, Xavier T. Manalang of Dannemora, two sisters and brothers- in-law and one brother and sister-in-law, Elizabeth and John Macalino, Graceshella and Khoi Tran, and Michael and Cindy Manalang: four nephews, Roman Macalino, Lukas, Jacob and Ridley Tran and his parents Jose and Isabelita Manalang, his aunts and uncles, Jess and Mary Manalang, Concepcion Jesuitas, Lorna Piedad, and Jose and Gertrude Francisco. Joe is also survived by many of his cousins. Joe's family would like to express their gratitude to the staff at the HK Freedman Renal Center for their care and support over the years.
Joe attended Abraham Lincoln High School in Brooklyn, NY, and received his degree in 1990. He also attended Kingsborough Community College in Brooklyn, NY, and later attended SUNY Plattsburgh. Joe worked at Clinton County Advocacy and Resource Center in Plattsburgh, NY, until his illness precluded it. He was a devoted father, enjoying fishing with his son, watching him participate in school athletics, especially football. Joe also loved spending long hours discussing world history with his son. Joe was a member of the Pi Kappa Phi Fraternity at Plattsburgh State University, and often spoke fondly of his time with the Fraternity. Joe was a firearms enthusiast, and a member of the NRA. He loved collecting model toy soldiers, tanks, planes, cameras, video games, and Spyderco knives. Joe loved to reminisce about his childhood friends, and adventures including growing up in the Philippines, Nigeria and Brooklyn. He was an avid Patriots Fan. He also loved the pets that he had over the years. Joe especially loved his big orange cat Oz, and loved rubbing his cat's tummy. He was also an aquarium enthusiast. Joe enjoyed spending time with his beloved wife Britteny, and his wife's family. Joe was particularly fond of spending time with his youngest nephews.
A Mass of Christian Burial will be celebrated at the convenience of the family.
Arrangements are entrusted to Brown Funeral Home, 29 Broad St., Plattsburgh, N.Y. (518) 561-3980. Online condolences may be offered at www.brownfuneralhomeinc.com.