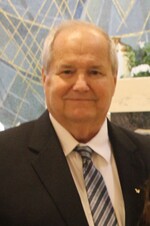 Kurt F. Tobrocke, 69, of Plattsburgh, passed away Tuesday, March 16, 2021 at his home with his family by his side under the care of Hospice of the North Country. He was born in Plattsburgh on April 27, 1951 the son of Rollind and Betty (Bedore) Tobrocke.
Kurt served his country in the United States Army. Following his honorable discharge, he continued to serve his community; ultimately retiring as a Detective from the Plattsburgh City Police where he championed youth programs including co-founding the city’s D.A.R.E. program and playing an instrumental role in creating the PAL Football Program. His greatest love was for his wife Cheryl, and it was well known that he adored his two grandchildren.
He was predeceased by his parents, and his wife Cheryl.
He is survived by his sons; Toby (Melissa) Tobrocke and their children; Alexandra and Quinn, Derek Tobrocke, his siblings; Karl Tobrocke , Karen Tobrocke, Trudi (Gary) Bouvia, Fritz (Joni-Jill) Tobrocke, Heidi Tobrocke of Plattsburgh, Hans (Lorraine) Tobrocke, and several nieces and nephews.
Calling hours will be Friday, March 19, 2021 from 4:00-7:00pm at the Brown Funeral Home, Plattsburgh. A Mass of Christian Burial will be Saturday, March 20, 2021 at 10:00am at St. Peter’s Church. Interment will be at the parish cemetery with Military Honors.
In lieu of flowers, memorial donations may be offered to the Ted K Center for Youth and Families. Care of the Plattsburgh Police Department, 45 Pine Street, Plattsburgh, NY 12901.
Arrangements are entrusted to Brown Funeral Home, 29 Broad Street, Plattsburgh, NY 12901 (518) 561-3980. Online condolences may be offered at www.brownfuneralhomeinc.com