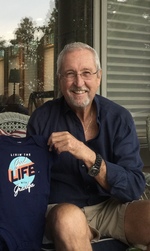 Area businessman, Larry W. Jeffords, 73, of Marco Island, Florida and Chazy, New York, passed away Thursday, January 7, 2021 after a courageous battle with cancer. Larry was born on July 19, 1947 to Merrill and Louella (Rounds) Jeffords and grew up in Enosburg Falls, Vermont.
He attended Norwich University and received a Bachelor of Science in Civil Engineering. Upon completion of his degree, he started his career as an engineer with Vermont Structural Steel. He served as a first lieutenant in the United States Army in Camron Bay, Vietnam, where he was the liaison for all bridge construction in II Corps. Upon return from Vietnam, he continued working for Vermont Structural Steel until 1984. On January 4, 1985, he married his wife, Judy, and they established Jeffords Steel and Engineering Company on the very next day. Larry served as the Chief Executive Officer until his death.
Larry cared deeply for his community, having served on several Boards, including the North County Chamber of Commerce, Champlain Valley Builders Exchange, The Development Corporation, The Foundation of Champlain Valley Physicians Hospital, Plattsburgh YMCA, New York Steel Fabricators Association, American Institute of Steel Construction, and the ARC Foundation. He also served at his alma mater, Norwich University, as a trustee.
Anyone who knew Larry was aware that he was quick to comment, share an opinion, and had a unique sense of humor. Whether it was playing golf, enjoying a “Doc O” with the “Martini Group,” or spending time with his family, he always knew how to have a good time—just ask anyone who attended his daughter’s wedding. He was also an accomplished marathon runner, having completed 18 marathons, including the Boston Marathon twice.
Larry was especially proud of the company he built and all of the employees, whom he considered family. He was most proud of his daughter and her accomplishments, as well as his one-year-old granddaughter.
He is survived by his wife of 36 years, Judy, along with their daughter, Alexandra Jeffords Fessette (Allen) and granddaughter, Stella Fessette. Larry was predeceased by both of his parents and his brother, Daniel.
Arrangements are entrusted to Brown Funeral Home. However, due to the COVID-19 environment, there will be no formal calling hours. A celebration of life will be announced at a later date once it is safe to gather. Charitable donations can be made to Hospice of the North Country or the Foundation of Champlain Valley Physicians Hospital in memory of Larry.