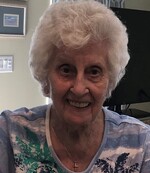 Lillian M. Hamel-Rizzie, 90, formerly of Plattsburgh, passed away in Elkton, Florida on March 22, 2021 surrounded by family where she lived with her son. As her health declined, she was under the constant loving care of her family and most recently Hospice.
She was born in Clayburg, New York on November 12, 1930, daughter of the late Wilmer and Louise (LaFountain) Sharkey. She married Roger Hamel on Valentine’s Day 1953 and they celebrated many of life’s joys together for 28 years before his untimely death on 9/11/1981. She was sincerely devoted and lovingly cared for Roger during his 8 year illness spending endless days and nights with him at the hospital. They raised 5 children together on their farm in Clayburg and were role models for a strong work ethic and commitment to family. It was important their children receive a Catholic education encouraging their faith in God. She was as loving and committed to her children as she was to their father.
She loved gardening and flowers and canned vegetables and fruits to enjoy throughout the year. She had beautiful flower beds around her home and would torment the family dog if he dared dig in any of them. She enjoyed sewing and was an expert seamstress making many of her clothes and those for her daughters. While raising 5 children she also maintained a full time job in Plattsburgh. She excelled in accounting and worked at various county offices until her retirement from BOCES. She was an energetic, spirited and hard working woman.
After many years as a widow, she met and married Carlton Rizzie. They made their home in Plattsburgh and were active members of Our Lady of Victory Church. After Carlton’s death 2019 she moved to Florida to live with her son Derek.
In addition to Roger Hamel and Carlton Rizzie, she was predeceased by two sons, Drew and Dale Hamel and a granddaughter, Angel Hamel. She was also predeceased by her brothers: Wilmer, Bernard and Francis Sharkey and her sister Marion Collins. She is survived by her brother Harold Sharkey of Missouri and brother-in-law Gordon Collins of Saranac.
She is survived by her children; Dawn Manley and husband John, Deborah Allen and husband Daniel, and Derek Hamel and companion Jennifer Reisig. Seven grandchildren: Travis and Adam Hamel, Sara Hamel Deisinger, Emily Manley Parker, Danielle Hamel, Bryan Allen and Dustin Hamel. Six great grandchildren: Madelyn and Holly Hamel, Audrey Deisinger, Brooklyn Hamel and Sadie and Ryan Parker.
There will be no calling hours. A celebration of life and Memorial Mass will be celebrated at the Church of the Assumption in Redford, NY on Monday, June 7 at 11:00 AM. She will be laid to rest in the parish cemetery next to Roger Hamel.
Masses for the repose of her soul at the church of your choice are graciously appreciated or a donation in her memory to your local Hospice.
Arrangements are entrusted to Brown Funeral Home, Plattsburgh. Online condolences may be offered at www.brownfuneralhomeinc.com.