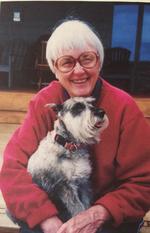 Lona L. Helmeci of Cumberland Head, completed her earthly journey on January 6, 2020 at CVPH/UVM Medical Center. Lona (aka Lady Liberty) was born on July 4, 1933, the daughter of Linda E. (Lundstrom) and Stephen L. Helmeci in Ashtabula, Ohio. She was predeceased by her parents and brother Stephen. Lona is survived by her beloved nephew Christopher (Barbara) Helmeci of Mt. Lebanon, PA, and their sons, Stephen and Daniel, sister- in-law, Patricia Helmeci of Mt. Lebanon, PA; her cousins, Lawrence Kaufman of Ashtabula, Patricia Louth, Janet Reynolds, and Joanne Lawson, all of St. Petersburg, Florida and Joanne Tobias of Ashtabula. Also surviving Lona are members of Lona’s loving extended family, Anne Marie Morgan of Plattsburgh, NY, Sharon Basso, Orleans, MA, and Keith Basso of Manila, PI., spouses and their children, Joey Smith, Luke Basso, and Shea Basso.
Lona’s educational journey began in Ashtabula through high school. She then achieved a Bachelor of Fine Arts at Kent State, Ohio, and a Masters of Education (Reading Remediation) at Miami University in Oxford, Ohio. Her early career years were in New York City, where she worked as a Graphic Artist, an Elementary Art Teacher on Long Island, and a Social Worker in Harlem, NY and Ashtabula. Lona placed many foster and adoptive children in loving homes during those years, often carrying newborn infants on the Staten Island Ferry to foster homes. She also taught at the International School of Prague at the American Embassy in Czechoslovakia and upon returning to the U.S. taught Remedial Reading at Peru Middle School for twenty years.
Lona was not only an artist on paper and canvas; she was an artist of the soul, and touched countless lives with her kindness and generous spirit. She listened to you with her heart. A former student once approached her and said, “Ms. Helmeci, you were always kind and made us feel good about ourselves.” She often gifted her students with sketches she drew of them in class. Of Finnish descent, Lona epitomized the Finnish word SISU, which is almost untranslatable, but as the Finns say, has a magical, mystical quality of inner strength, perseverance, resiliency and sustained courage in the face of adversity that is carried through life in all they do.
She was filled with curiosity of other cultures, and travelled extensively throughout Europe over the years, always adding to her bucket list of visiting art museums. Lona was a member of the Visual Artists’ Network in Plattsburgh, an art Docent at SUNY, Plattsburgh, and also a volunteer with Cumberland Head Tomorrow. The past twenty years living on the shores of Lake Champlain were in her own words, “saving the best for last.”
As per Lona’s wishes, there will be no calling hours, Arrangements will be made with the Brown Funeral Home, Plattsburgh, NY. A celebration of her life for family and friends will be held at a later date, hopefully, on July 4th!. She will be interred in Ashtabula, Ohio in Edgewood Cemetery with her parents and beside her brother, Lady Liberty’s journey home finally completed.
To paraphrase the artist Georgia O’Keefe, Lona found she could say things with color and shapes that she couldn’t say any other way, things that she had no words for.

Arrangements have been entrusted to the Brown Funeral Home, 29 Broad Street, Plattsburgh, NY 12901. Online condolences and memorial candles may be offered at www.brownfuneralhomeinc.com.