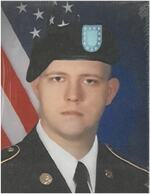 Michael R. Cross, 28, formerly of Plattsburgh, passed away Saturday, December 5, 2020 at his home in San Antonio, Texas with family by his side. He was born in Plattsburgh on September 17, 1992, the son of Warren Cross and Kelly (Rock) Torriente.
Michael graduated from Saranac High School and served in the U.S. Army as a combat medic until his retirement as a specialist for medical reasons.
He is survived by his mother, Kelly (Rock) Torriente, his father Warren Cross, two sisters Maribeth Cross and her son Desmond, Bethany DiCaprio and her husband Christopher and their son Orson, and several aunts, uncles and cousins.
A great aunt Lillus Rock passed away earlier.
Calling hours will be held on Wednesday, December 16, 2020 from 4:00 to 7:00 pm at the Brown Funeral Home, 29 Broad St. in Plattsburgh. Words of Remembrance followed by military honors will be held at 7:00 pm in the Brown Funeral Home Chapel. Interment will be in Saratoga National Cemetery on Thursday, December 17, 2020 at 12:00 p.m . Memorial donations may be offered to the Semper Fi Foundation America’s Fund.
Arrangements are entrusted to the Brown Funeral Home, 29 Broad St. in Plattsburgh. Online condolences may be offered at www.brownfuneralhomeinc.com