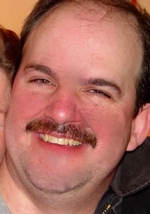 With deepest sorrow, we announce that Michael Carl Katz, age 51, a most beloved father, son, brother, nephew and cousin, passed away suddenly at his home due to heart complications.
Mike was born and raised in Plattsburgh, NY. He graduated from PHS in 1987.
At a young age Mike learned the value of hard work. He started his career at P & C in 1985 stocking shelves and over time worked his way up to management until the store closed in 2008.
The light of Mike’s life was his son Mikey, who he adored.
Mike loved football and watching his favorite team, the 49er’s. He was always a 49er Faithful.
Those who knew Mike, lost a shining light.
Mike had a gentle soul and would light up any room with his smile and laughter.
Mike is survived by his mother, Bonnie (McGee) Katz, brothers Mathew and William, sister Kristen, son Michael, niece, nephews and many aunts, uncles and cousins.
We know Mike is now with his father, Carl Katz, grandparents and his uncles.
One thing is certain, Mike is going to be deeply missed.
Due to COVID there will be no calling hours.
Arrangements are entrusted to the Brown Funeral Home, Plattsburgh. Online condolences may be offered at www.brownfuneralhomeinc.com.