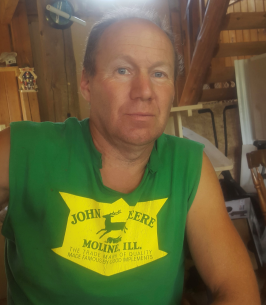 Michael Racette, 59, of the Cane Road, Saranac, NY died Friday, August 5, 2022 at his home. Michael was the son of the late Jerry and Marion (Parrrotte) Racette.

Michael attended Saranac school, leaving in the 10th grade to become a self-employed logger for more than 30 years. Michael’s dream was to become a dairy farmer so he became a dairy farmer but due to health and other issues he left farming after eight years. He worked at Adirondack farm. He then went to work for the Town of Saranac highway department, when the position became open, he became the mechanic. But he also had a hobby farm at home. Michael was a true Mr. Fix it, always having a list of things that needed to be completed. Michaelvenjoyed kayaking and going to Rollins Pond with his wife, children and grandchildren.

Michael is survived by his wife Lisa (McKenzie) Racette, his son Andrew Racette, and his Fiancé, Heather Holloway, his daughter Katie Morris, Her husband Andrew Morris. Christina Utzler and her husband Travis, Bobby Jo Racette, and granddaughter Selena Racette, who he raised as his own. His grandchildren, Catherine, Aiden, Nevaeh, Landon, Emma, Ariana, and his little buddy Oliver. Also surviving are his sisters Linda Racette, Judy McKenzie and brother-in-law Steve McKenzie. As well as many other in-laws, cousins, and many friends that he considered his family.

At Michael’s request there will be no services.