To share your memory on the wall of Nadine Burgess, sign in using one of the following options:

Print
Nadine Margaret Burgess died peacefully on March 12, 2020 at her home in Plattsburgh.

She was born in Au Sable Forks on July 17, 1928, the daughter of Reginald Borrette and Bernice Rabideau.

She was born in Au Sable Forks on July 17, 1928, the daughter of Reginald Borrette and Bernice Rabideau.

She attended Catholic School at Holy Name Parochial School in Au Sable Forks and graduated as the Salutatorian for the class of 1945 on from Au Sable Forks High School.

Nadine married William “Bill” Burgess on June 1, 1950 at Holy Name Church in Au Sable Forks. Together they founded Burgess Enterprises in Plattsburgh and ran the business until they retired. They enjoyed 49 years together until Bill died on August 30, 1999.

Nadine was a member of the Bridge Club and Saint Peter’s Church in Plattsburgh. She was a voracious reader and loved to watch PGA on TV. She was an avid gardener who grew vegetables and canned them when she was younger. She also grew berries and made jam for her family.

Calling hours will be Wednesday March 18, 2020 from 4-6 p.m. at the Brown Funeral Home in Plattsburgh. A funeral service will be held at the funeral home at 6 p.m. Father Reamer officiating.

Burial will take place in the spring at Saint Peter’s Cemetery in Plattsburgh.
Arrangements entrusted to Brown Funeral Home. Online condolences may be offered at www.brownfuneralhomeinc.com
Read Less

To send flowers to the family or plant a tree in memory of Nadine Margaret Burgess, please visit our Heartfelt Sympathies Store.

Receive notifications about information and event scheduling for Nadine

We encourage you to share your most beloved memories of Nadine here, so that the family and other loved ones can always see it. You can upload cherished photographs, or share your favorite stories, and can even comment on those shared by others.

Posted Mar 13, 2020 at 08:21pm
Nadine was very kind to my sister and me back in high school. She brought us along on a trip to New Hampshire and Maine along with Cynthia and very kindly paid our way. It was our first view of the ocean and we will never forget it. A fine person.
Comment Share
Share via: 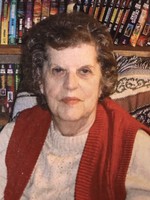