To share your memory on the wall of Richard Green, sign in using one of the following options:

He loved to drive and loved his family even more. He never missed a monthly 10 hour round trip drive to Boston to see his daughter. His nieces and nephews adored their Uncle Richie and his unexpected drop-in visits. He never missed Jeopardy and would often shock people with how quickly and accurately he would get the correct answer. He gave the best life advice which will be missed deeply.

His family would like to thank all of the doctors and nurses who showed so much kindness throughout his courageous battle with cancer.
Read Less

To send flowers to the family or plant a tree in memory of Richard A. Green, please visit our Heartfelt Sympathies Store.

Posted Nov 07, 2020 at 11:22am
We were so heartbroken to hear that Richard had passed away and we will greatly miss him. He always greeted us with a huge smile whether in person or on the phone and he always knew exactly what we wanted. His pizzas were the absolute BEST and his service was impeccable.
Our deepest sympathies to all of his family and close friends. You have lost an amazing man.
Hugs from Hugh and Cheryl Herron
Comment Share
Share via:
AG

Posted Nov 03, 2020 at 08:17pm
To Richard's family. A few years ago my son bought a house across the street from the pizza shop. I went over and introduced myself to Rich and he gave me the scoop of the neighborhood. Took my phone number said that he would look out for my son when he bought the house. When my son had his housewarming party he brought over free pizza and sat had and had a cold beer with us! Was always full of smiles. Full of laughs. Full of life. Recently when my son told me he had passed my heart was smashed. Because he was an incredible human being and I am so sorry for your family's loss. As my son said when he sent this post out that he was a legend. And that's a fact! RIP Rich till we meet again!
Comment Share
Share via:
MN

Posted Oct 26, 2020 at 04:13pm
I can remember Richie showed up at my Mom's house. When he got here he was all sweaty, out of breath. My mom asked "Richie, how did you get here?" He replied " I took my scooter!" We all laughed. He adored my Mom and visited her often. A story I will never forget. His ray of sunshine will always shine through the rest of us. RIP RIchie!
Comment Share
Share via:
AC

Dear Erica and Richie, Sending you lots of love and Condolences at this time. I am SO sorry. Love Aunt Kathi and Uncle Ed 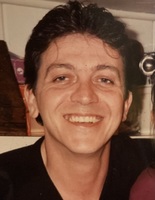