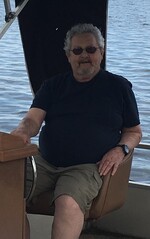 Richard L. Kiroy, Sr., 77, of Plattsburgh, passed away on Sunday November 29, 2020 at UVHN:CVPH Medical Center in Plattsburgh. He was born in Eugene, OR on May 8, 1943 the son of Conwald and Ruth (Bailey) Kiroy.
Dick grew up in Dannemora, NY; he joined the United States Navy in 1959, becoming the first of three generations to serve in the Navy. After being honorably discharged in 1969 as a Machinist Mate First Class (SS), he worked in Connecticut for E. B. Electric Boat before moving back to the North Country to work for corrections. Many years later he worked for General Motors in Massena, NY. Dick began flying airplanes in the early 1980’s. Later he began the long process of becoming a flight instructor at Adirondack Flight Center in Lake Clear and then Flying Nunn’s Aviation in Plattsburgh. He enjoyed things that moved fast; cars, motorcycles, boats, and planes. Dick also enjoyed being outdoors, hunting and fishing.
He was predeceased by his parents and his beloved dog, a Brittany Spaniel, Patty Cake.
Dick is survived by two sons; Richard L. Kiroy, Jr. and his wife Amy of Morrisonville, Bradley Kiroy and his wife Brandy of Plattsburgh, a step daughter; Barbara VanDyck and her husband Timothy of Saratoga Springs, grandchildren; Casey, Brett, Brandon, Nicolas, Kayla, Cole, Fahlin, Rans, Cassandra, Jesse, Max, Katie and Samuel, several great grandchildren, his siblings; Ralph “Bill” (Vivian) Kiroy of Saranac, Conwald “Jack” (Sue) Kiroy of Rochester and Kathy Kiroy of Dannemora, several nieces and nephews also survive him.
At Dick’s request services will be private.
Donations in Dick’s memory may be made to the North Country Cancer Fund.
Arrangements are entrusted to Brown Funeral Home, 29 Broad Street, Plattsburgh, N.Y. 12901 (518)561-3980. Online condolences may be offered at www.brownfuneralhomeinc.com.