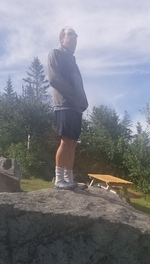 Richard “Rick” Oertel, 65, passed away unexpectedly, but peacefully, at his home in Plattsburgh, NY on Dec. 19, 2020.
Rick was born in Racine, Wisconsin, on October 12, 1955, to Anne and Richard (Dick) Oertel. He had six siblings: Christine Rogers, Michael, Corinne Kaufman, Robert (Debra), Mary Breger (Lee), and Lisa Imre (Ron). Both Michael and Christine predeceased him, as did his parents.
Rick was raised in the Catholic religion, attending Catholic schools throughout high school. He attended the University of Wisconsin-Platteville for his undergraduate degree in criminal justice. One of the highlights of his life was spending his senior year in Europe, where he was based in Salzburg, Austria, but hitchhiked and took trains all over Europe.
When he returned from Europe, he was employed by Lutheran Social Services, Jordan Hall, in Racine where he worked with at-risk teens. Several years later he transferred to the Home and Community Services Program within LSS. There he met and worked with his future wife, Jacqueline (Schveidler) Stockwell.
In 1980 Rick and Jackie moved to Salt Lake City, Utah, so that Rick could pursue his MSW at the University of Utah. Their son, Joshua, was born there in 1981. Upon graduation, they moved to Orofino and later Lewiston, Idaho, where Rick would work for North Idaho Children’s’ Home. Their children, Lindsay and Michael were born there.
Wanting to be “closer” to home (Wisconsin), the Oertel family moved to Plattsburgh in 1990, where Rick was employed at the Northern NY Center, later to become Behavioral Health Services North. He remained working there in various supervisory positions for 29 1/2 years until his retirement in 2019. One of the highlights of his career was when Rick and several of his colleagues toured NYS doing trainings under a grant from the Office of Mental Health dealing with children with mental illness and out-of-home placements.
Rick was also an adjunct professor at SUNY-Plattsburgh for 10 years in various departments but ending up in the Human Development and Family Relations Department, with a course on mental health. He also occasionally taught classes on administration. He loved his students and wanted to continue teaching after he retired from his fulltime job.
This story of Rick’s life would be incomplete without mention of other of his passions in life. Of course, his wife and children were first. He faithfully followed all three kids’ athletic careers at Peru and in college. He was also an AVID supporter of the Green Bay Packers and never missed watching a game. In addition, he loved watching the Milwaukee Bucks and the UW basketball and football teams. Last, but definitely not least, was his love for his dog, Lambeau, our five-year-old goldendoodle. He took her for walks religiously, come rain or snow.
We will miss you, dearest husband, Dad, brother, friend!
Arrangements are on hold for now due to the pandemic, but an informal memorial will be planned in the summer. Online condolences are encouraged at www.brownfuneralhomeinc.com, Rick’s family greatly appreciates it.
Arrangements are entrusted to the Brown Funeral Home, 29 Broad St. in Plattsburgh.