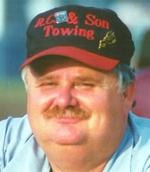 Rickey J. Collins, 71, of Morrisonville passed away peacefully Tuesday, February 9, 2021 at the CVPH Medical Center with his family by his side after a battle with cancer.. He was born in Plattsburgh on August 13, 1949 the son of Raymond and Bernadina (Pavone) Collins. Rickey owned and operated R. C. and Son Enterprise garage and towing business for many years. He served as Town Clerk for the Town of Plattsburgh for several terms. He will be remembered for his good nature, kind heart and lasting friendships. Rickey was always willing to lend a hand to anyone in need due to his generous heart. He will be best remembered for his love of conversing with anyone on just about any subject for hours on end.
Rickey was predeceased by his parents Raymond and Bernadina Collins.
He is survived by his son C. Cory and his wife Tammy (Barcomb) of Plattsburgh, his brother Stephen Collins and his wife Marcia of Orlando, FL, a grandson Christopher Collins, several nieces and nephews and a very special caregiver Mary Beth Gillen of Morrisonville.
At the request of Rickey, there will be no calling hours.
Services will be private and at the convenience of the family.
Interment will be at Mt. Carmel Cemetery.
In lieu of flowers, donations may be made to the American Cancer Society in his memory.
“Say not in grief “He is no more” but live in thankfulness that he was”
Hebrew Proverb
Arrangements are entrusted to the Brown Funeral Home, Plattsburgh.
Online condolences may be offered at www.brownfuneralhomeinc.com.