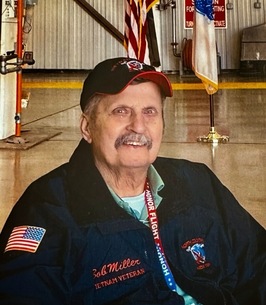 Robert E. “Bob” Miller, 81, of West Chazy, passed away Friday, October 21, 2022 at his home. He was born in Elmira,NY on May 30, 1941, the son of John and Myrtle (Lockner) Miller.
Bob graduated from Odessa Central High School. He then entered the United States Air Force in August, 1958 and stationed in Plattsburgh assigned to the 4020 Maintenance Squadron on the KC-97 F+G Model Aircraft until May 1963. He worked for international Salt Company until 1966 where he was hired as a Transient Aircraft Maintenance Mechanic at Plattsburgh Air Force Base and later promoted to Nightshift Supervisor in the heavy equipment shop in the Transportation Squadron. In 1980 he was promoted to the Vehicle Maintenance Office Position in charge of all vehicle repairs. He held this position until the base closure in 1995 with a combined 34 ½ years of service at Plattsburgh Air Force Base. Along with the air base, Bob was the Chief Technical Inspector for area race tracks that included American Canadian Tour, Malone International Speedway, Evans Mills Speedway, and Hooters Pro North Tour, and most recently Airborne Speedway. He also helped build, prepare, and sometimes crewed the NASCAR Busch North Series cars of Dale Quarterly, and Denny Doyle with many successes. He later was hired by NJ Brunell and Sons Paving as a Mechanic Supervisor for many years.
In his free time he enjoyed hunting, fishing, camping, NASCAR and local racing. He enjoyed sitting by the campfire, and good times with friends as well as simply being in the outdoors. He as a member of the American Legion Post #20 and the Plattsburgh Elks Post #621.
Bob was predeceased by his parents, father-in-law, Malcolm Bushey, brother-in-law, Timothy LaBarge.
He is survived by his wife of 7 weeks and love of his life, Karen Miller, and son Scotty M. Miller and his companion Maya Vogel, his brother John L. Miller of Lake Tahoe, Nevada, and Jack’s Brother Richard Miller of Colorado. His non-speaking children John R. Miller and Annette Agor (Jeremy) of Texas, his granddaughter Caitlin Miller. On his wife’s side, his mother-in-law, Lucille Bushey, his brothers-in-law and sisters-in-law, Deborah (Kevin) Patnode, Susan Arnesan and her son Jason, his brother-in-law, Andrew (Deb) Bushey, Angela (Jim) Koller, and many nieces, nephews, great-nieces and great-nephews.
The family would like to thank their dear friends, Don (Gisele) Hanson and Mark (Meg) Hanson for always being there to lend a hand- we couldn’t ask for better friends and their grandson Graham for giving Bob hugs when needed. The family would like to thank Janet Duprey for putting Bob on the first honor flight of the year. Lastly, a thank you to Dr.Homer for going above and beyond for Bob.
Calling hours will be held on Wednesday, October 26, 2022 from 3:00-5:00pm at the Brown Funeral Home, in Plattsburgh. A funeral service will follow at 5pm in the Brown Funeral Home Chapel with military honors.
In lieu of flowers, memorial donations may be made to North Country Honor Flight.
Arrangements are entrusted to Brown Funeral Home, 29 Broad St., Plattsburgh, N.Y. 12901 (518) 561-3980. Online condolences may be offered at www.brownfuneralhomeinc.com.