To share your memory on the wall of Roy Lynch, sign in using one of the following options:

To send flowers to the family or plant a tree in memory of Roy Lynch, please visit our Heartfelt Sympathies Store.

Receive notifications about information and event scheduling for Roy

We encourage you to share your most beloved memories of Roy here, so that the family and other loved ones can always see it. You can upload cherished photographs, or share your favorite stories, and can even comment on those shared by others.

Love, Michel & Eileen and Tom & Floripes sent flowers to the family of Roy Lynch.
Show you care by sending flowers

Posted Aug 25, 2020 at 06:57pm
It seems like only yesterday that I made your wedding flowers!!! I often saw you at Our Lady of Victory church. You always had a smile on your face. Roy, you will be greatly missed!!! To Roy's family, especially his wife Patty, I will keep you in my prayers. Remember: LOVE is the greatest gift of all. It overrides death!!! Pray to Roy, and watch for the many, many signs that he will send to you. God bless you. Kathy Lambert
Comment Share
Share via:
BL

Posted Aug 25, 2020 at 02:31pm
I would like to express my condolences to Roy’s family, I live at Newell Avenue would love talking to Roy when he walked by most every day. He was a very nice man and will be missed in the neighbor hood. God bless the family, Bob Lacey
Comment Share
Share via:
LE

Posted Aug 24, 2020 at 03:48pm
Roy brought so many gifts to our lives. We will forever cherish the memories. May you find comfort in the love that still surrounds you.

Posted Aug 24, 2020 at 02:27pm
Please accept our most heartfelt sympathies for your loss.. a loss we all feel. Our thoughts are with you and your family during this difficult time.

Posted Aug 24, 2020 at 11:03am
As a Retired CO from Arthur Kill CF on Staten Island my condolences go out to the Family
From Wendel T. Green (Retired 12/95)
Comment Share
Share via: 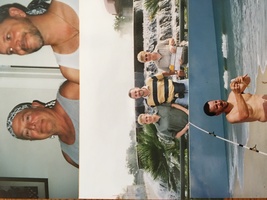