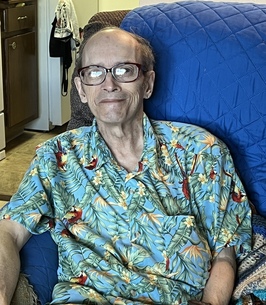 Thomas (Tom) Peter Stewart, 71 of Plattsburgh, passed away Friday, August 26, 2022 at his home with his loving family by his side.
He was born in Plattsburgh on July 15, 1951 the son of Orville Stewart and Mary (Carpenter) Stewart.
Tom graduated from Saranac Central School and attended BOCES for Culinary Arts.
He attended St. Peter’s Church.

He discovered at an early age he enjoyed crochet and made numerous Afghans and lap robes. He donated many of these to RSVP and was honored at their yearly celebration. He also donated many as gifts to the Cancer Center at CVPH. He loved to fish, camp out in his brother’s tree house, play cards with friends, work puzzles, and had a great collection of Roosters.

Arrangements are entrusted to the Brown Funeral Home, 29 Broad St., Plattsburgh, New York 12901 (518) 561-3980. Online condolences may be offered at www.brownfuneralhomeinc.com