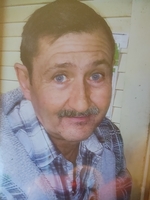 Wilfred "Jack' LaTour, 60, of Plattsburgh, passed away peacefully at his home with family and friends by his side along with Hospice of the North Country on February 11, 2022, after a long battle of cancer. Wilfred was born December 11, 1961 to Isabelle Robare and Wilfred LaTour. Wilfred was predeceased by his parents. He enjoyed spending time at home with his family and friends. When he wasn't home he was doing handyman's work. Wilfred is a beloved father, long-time companion, brother, uncle, and amazing Papa. Wilfred also served in the military.
He is survived by his loving companion, Susan Hendrie of Plattsburgh, his son Matthew LaTour of Plattsburgh, 2 stepsons, Leon Hendrie and his wife Lisa of Peru, and David Hendrie and his wife Alexis of Moria, four sisters, Deborah Hancock and her fiance Terry Rivers of Harkness, Karen and Robert Peck of Peru, Cynthia and her husband Daniel Messier of Plattsburgh, Joni of Saranac, his brother James LaTour of Plattsburgh, his best friend of many years, Keith McCaughan, his right-hand man Jamie Mitchell and his fiance Angie Beshaw of Plattsburgh, his step-mother, Linda Latour, of Plattsburgh and step-father Thomas Parent Sr. of Plattsburgh, 4 grandchildren, Journey, Hunter, Nathan of Moria and Zoey Macey of Plattsburgh, several nieces and nephews.
At his request there will be no public services. Memorial donations can be made to Jack's family.