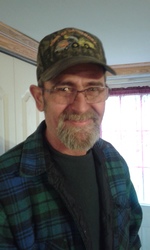 William R. “Bill” Byrd, 59, of Plattsburgh formerly of Lyon Mountain, passed away on January 4, 2020 at the UVM-CVPH Medical Center with his family by his side. He was born on May 24, 1960, the son of Donald and Erma (Bright) Byrd.
He was an avid outdoorsman, enjoying hunting and fishing. He was a family man and never missed his grandchildren’s events; soccer, basketball, or dance recitals. In his free time, he could be found taking rides on his motorcycle with his wife. He was a skilled tradesmen, woodworking and was known to be the town mechanic. He will be missed for his chartable values, helping others and being there with his family. He was a loving man who dedicated his life to his family.
He was predeceased by his father, his grandmother Mary Callander.
He is survived by his mother, his wife, Lynn Byrd, his children; Jennie Chinchilla and her husband Miguel, Heidi Brassard, his grandchildren; Nathalia Chinchilla, Kameron Chinchilla, Leticia Chinchilla, Derrick Chinchilla, Alexia Brassard, Brandon Bassard-Byrd, his sister Bonnie Gero and many nieces, nephews, cousins, uncles, aunts, brothers-in-law and sisters-in-law.
There will be no public calling hours or services.
Arrangements have been entrusted to Brown Funeral Home, 29 Broad St., Plattsburgh, NY 12901, 518-561-3980. Online condolences may be offered at www.brownfuneralhomeinc.com.